In the wake of recent events across the Southwest I would simply like to share a letter written in 1883 by Walt Whitman in commemoration of the 333rd anniversary of the founding of Santa Fe.

THE SPANISH ELEMENT IN OUR NATIONALITY 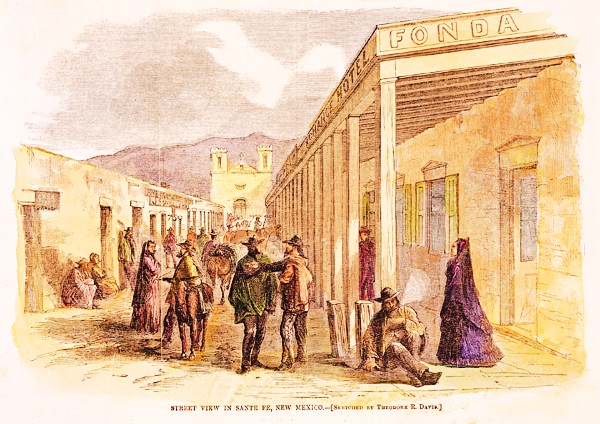 To Messrs. Griffin, Martinez, Prince, and other Gentlemen at Santa Fe:

Your kind invitation to visit you and deliver a poem for the 333d Anniversary of founding Santa Fe has reach’d me so late that I have to decline, with sincere regret. But I will say a few words offhand.

We Americans have yet to really learn our own antecedents, and sort them, to unify them. They will be found ampler than has been supposed, and in widely different sources. Thus far, impress’d by New England writers and schoolmasters, we tacitly abandon ourselves to the notion that our United States have been fashion’d from the British Islands only, and essentially form a second England only — which is a very great mistake. Many leading traits for our future national personality, and some of the best ones, will certainly prove to have originated from other than British stock. As it is, the British and German, valuable as they are in the concrete, already threaten excess. Or rather, I should say, they have certainly reach’d that excess. To-day, something outside of them, and to counterbalance them, is seriously needed.

The seething materialistic and business vortices of the United States, in their present devouring relations, controlling and belittling everything else, are, in my opinion, but a vast and indispensable stage in the new world’s development, and are certainly to be follow’d by something entirely different — at least by immense modifications. Character, literature, a society worthy the name, are yet to be establish’d, through a nationality of noblest spiritual, heroic and democratic attributes — not one of which at present definitely exists — entirely different from the past, though unerringly founded on it, and to justify it.

To that composite American identity of the future, Spanish character will supply some of the most needed parts. No stock shows a grander historic retrospect — grander in religiousness and loyalty, or for patriotism, courage, decorum, gravity and honor. (It is time to dismiss utterly the illusion-compound, half raw-head-and-bloody-bones and half Mysteries-of-Udolpho, inherited from the English writers of the past 200 years. It is time to realize — for it is certainly true — that there will not be found any more cruelty, tyranny, superstition, &c., in the resume of past Spanish history than in the corresponding resume of Anglo-Norman history. Nay, I think there will not be found so much.)

Then another point, relating to American ethnology, past and to come, I will here touch upon at a venture. As to our aboriginal or Indian population — the Aztec in the South, and many a tribe in the North and West — I know it seems to be agreed that they must gradually dwindle as time rolls on, and in a few generations more leave only a reminiscence, a blank. But I am not at all clear about that. As America, from its many far-back sources and current supplies, develops, adapts, entwines, faithfully identifies its own — are we to see it cheerfully accepting and using all the contributions of foreign lands from the whole outside globe — and then rejecting the only ones distinctively its own — the autochthonic ones?

As to the Spanish stock of our Southwest, it is certain to me that we do not begin to appreciate the splendor and sterling value of its race element. Who knows but that element, like the course of some subterranean river, dipping invisibly for a hundred or two years, is now to emerge in broadest flow and permanent action?

If I might assume to do so, I would like to send you the most cordial, heartfelt congratulations of your American fellow-countrymen here. You have more friends in the Northern and Atlantic regions than you suppose, and they are deeply interested in the development of the great Southwestern interior, and in what your festival would arouse to public attention.