Anyone who has read Boccaccio’s Decameron knows that it is undeniably the erotica of the 14th century: virtually all of the hundred stories contained in the book deal with illicit sexual escapes of some kind or another. And, living up to the Italian stereotype, most of them involve priests and nuns.

From Pasolini’s film adaptation of The Decameron.

To provide some context to those unfamiliar with Boccaccio’s magnum opus, the Decameron is a ‘frame tale’ in which ten young people escape the city of Florence, a city recently devastated by the plague, to frolic in the countryside and to tell each other stories. The escapades of the ten people in their bucolic villa, however, constitute a minority of the Decameron: most of the book is taken up by the hundred short stories that they tell each other in the lazy afternoon hours. 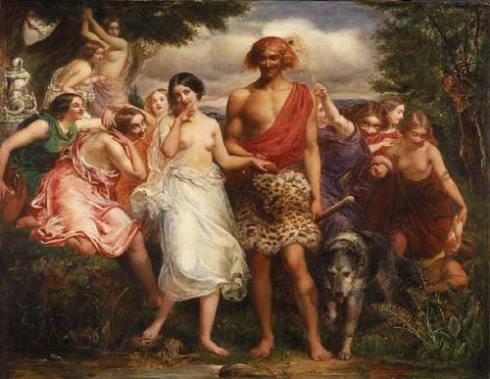 On the seventh day, the ladies of the group decide to go to a secluded lake in the woods to bathe — a place they call the ‘valle delle donne’ [the valley of women, or alternately the women’s valley]. Gittes argues that Boccaccio uses their romp in this valley to illustrate how sexual energy can be productively released through voyeurism.

Gittes argues that Boccaccio, in describing the ‘valle delle donne’ through simile, transforms the three “classical loci of rape” in Greek literature — the theatre, the wooded tarn*, and the pleasance** — into productive venues of sexual energy.

Gittes cites a variety of classical sources that describe the theatre, the wooded tarn, and the pleasance as sexually threatening. For example, Ovid writes that in the theatre, “chaste modesty doesn’t stand a chance”:

About them, each marking his choice

They’d so eagerly watched. Project Rape was on…

…Ever since that day, by hallowed

Our theatres have always held dangers for pretty girls.” (qtd. in Gittes 151)

When the women bathe in the pool in the ‘valle delle donne,’ Boccaccio writes that the lake “non altrimenti li lor corpi candidi nascondeva, che farebbe una vermiglia rosa un sottil vetro” [“hid their white bodies no otherwise than as a thin glass would do with a vermeil rose”] (qtd. in Gittes 153). Gittes points out that this wording is remarkably similar to Ovid’s description of Salmacis and Hermaphroditus: “the light / shines through the limpid pool, revealing him — / as if, within clear glass, one had encased / white lilies with the white of ivory shapes” (qtd. in Gittes 153). Unlike most of the tales of naked bathing women in antiquity, Boccaccio’s does not end in rape or attempted sexual assault of any kind.

Finally, Gittes compares the lake to the Roman piscina — a “fishpond incorporated into…the more luxurious Roman villas” (156) — an artificial ‘goldfish bowl’ that allows, metaphorically speaking, the ‘fish’ to be harvested in a controlled way. Gittes writes, “It is by no means clear whether the delle [of valle delle donne] is to be taken as a possessive or a partitive; does the valley somehow belong to the women, or do the women, like the fish, ‘belong’ to the valley?” (157) Gittes concludes that the transformation of the ‘wild’ lake into the domesticated ‘fish farm’ metaphorically represents a societal transition toward the productive control of sexual behavior.

Boccaccio’s The Decameron is one of the very few ‘popular’ novels of the 14th century, and has shed light on Italian medieval culture for centuries. But more than that: his theory about a ‘sexual economy’ of sexual surfeits and deficits in which ‘unreleased’ sexual urges can be detrimental to society still has resonance for modern understandings of sexuality and sexual politics.

Gittes’ article can be found here.

For more posts on critical theory and literature, click here.